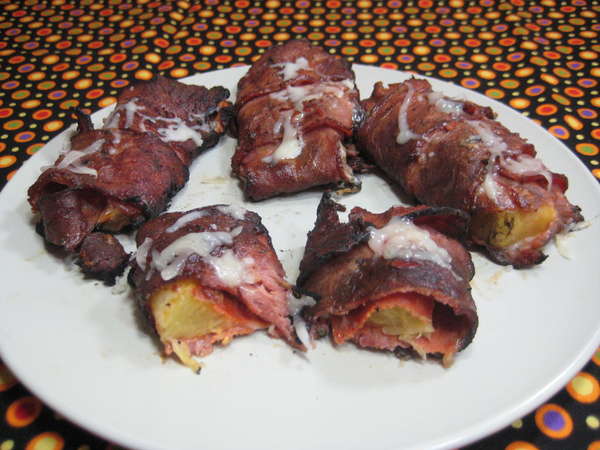 This Bacon Pizza Recipe by Instructables is Stuffed Like a Panzerotti

Kyle Towers — April 12, 2013 — Lifestyle
References: foodbeast
Share on Facebook Share on Twitter Share on LinkedIn Share on Pinterest
This bacon pizza recipe is similar to Pizza Pockets, except instead of being wrapped with dough, they are wrapped with bacon. Considering bacon is an extremely popular way to wrap food, this project is a natural transition. Bacon and pizza lovers can rejoice as these two epic foods have merged into one delicious combination.

The recipe calls for pineapple, cheese, pepperoni, spaghetti sauce and of course, lots of bacon! With the infinite amount of pizza toppings, sauces and cheeses out there, one can stuff this mini bacon pizza however they would like. May I suggest more bacon? The end result is somewhat of a masterpiece that is best shared with others and would do quite well as appetizers at parties.