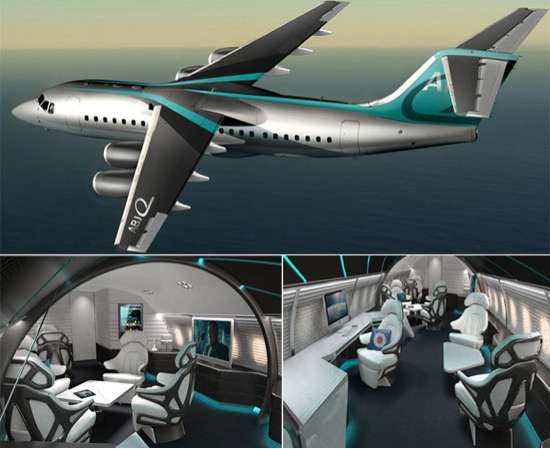 Susan Keefe — October 12, 2011 — Autos
References: designq & bornrich
Share on Facebook Share on Twitter Share on LinkedIn Share on Pinterest
The UK-based company Design Q had long been lauded as the one of the most celebrated names in futuristic aircraft design, and its latest showpiece the Avro Business Jet is no exception. Inspired by the ultimate jet-setter James Bond, Design Q, in conjunction with the aircraft asset manager Falko, devised a corporate atmosphere that would more than meet the requirements of 007 himself.

Playing with the common plot devise used in the classic spy epics, all the technology in the cabin is cleverly concealed. While you can be sure that the jet contains no weaponized pens, it does boast a smartly concealed vault, hidden monitors and other tucked-away gadgets. All these engaging doodads are hidden beneath a facade of fine leather furniture with sleek, modern detailing. To heighten productivity, the cabin is lit to mimic daylight and the arrangement of the furniture is reminiscent of an open-concept boardroom.