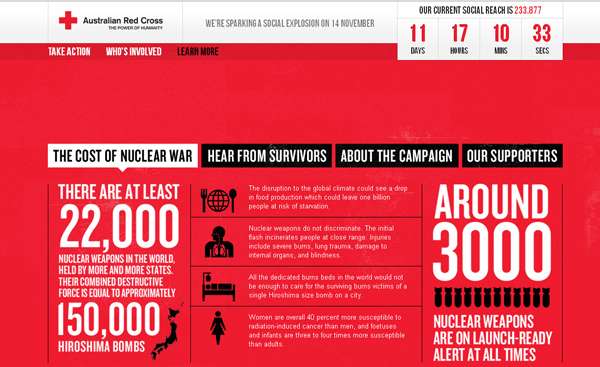 Katherinev123 — November 7, 2011 — Social Good
References: targetnuclearweapons.org.au & popsop
Share on Facebook Share on Twitter Share on LinkedIn Share on Pinterest
According to the Australian Red Cross website, there are about 3,000 nuclear weapons ready to launch at all times. This harrowing number is one of the reasons for the Australian Red Cross 'Target Nuclear Weapons' campaign, a joint effort between Australian Red Cross, Belgiovane Williams Mackay (BWM) Sydney and digital agency Pollen to advocate for the ban of these horrible destructive weapons.

The campaign hopes to involve the younger generation in the fight by inviting online users to vote on whether the weapons should be banned or not. The voting results will be used to demonstrate the public's concern over the weapons in a meeting with the Australian Red Cross and representatives from Red Cross and Red Crescent National Societies from 186 countries this November.

If you're against the use of nuclear weapons or you want to know more about the issue, visit the website and contribute your vote to the Australian Red Cross 'Target Nuclear Weapons' campaign.
1.2
Score
Popularity
Activity
Freshness
View Innovation Webinars