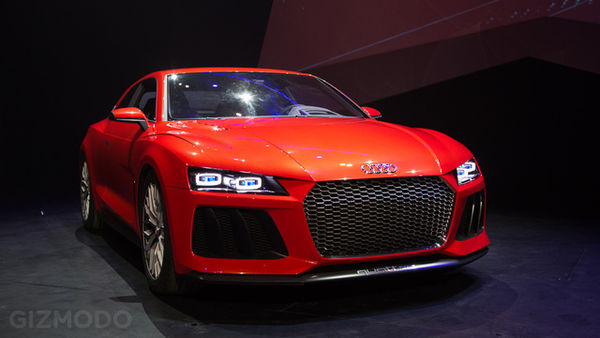 Ashley Noelle Lesiak — January 7, 2014 — Autos
References: gizmodo
Share on Facebook Share on Twitter Share on LinkedIn Share on Pinterest
The Audi Quattro Laserlight doesn't just look awesome, it's also built like something out of the future. Why is it called the 'Laserlight?' Well, that's because the headlights are made of lasers! Not only is that awesome, but it's incredibly useful, since that means these headlights can brighten up nearly 500 meters or 1,640 feet of road in front of you.

The Audi Quattro Laserlight didn't just bring lights to the Consumer Electronics Show 2014, it also brought fuel efficiency and tons of power. Not only does this car have 515 kW of power, but it's also very energy efficient. For one gallon of gasoline, it can get 94.09 miles, or 2.5 l/100 km. I'm sure anyone who can afford this beauty isn't too worried about saving money on gas, but even a millionaire would be impressed with these numbers.
5.2
Score
Popularity
Activity
Freshness
Access Advisory Services