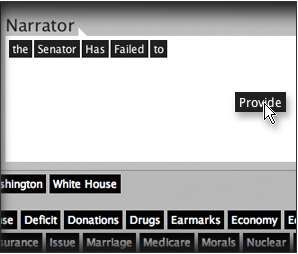 Marissa Brassfield — November 1, 2008 — Social Good
References: attackadgenerator & mashable
Share on Facebook Share on Twitter Share on LinkedIn Share on Pinterest
We've seen plenty of attack ads this election season, but none of them are quite like the do-it-yourself variety found at the Attack Ad Generator. This simple site lets you drag and drop words to create your own political attack ad against Barack Obama or John McCain in a digital version of refrigerator magnet poetry.

You'll select a background image over which your attack ad text will appear, as well as select a candidate to approve your ad. Your pick of politicians is between Stephen Colbert, Ron Paul, John McCain, and Barack Obama. Your finished attack ad can be embedded into your blog like a YouTube video.

According to Mashable, the Attack Ad Generator was created by Mike Demers, who is a software developer for YouSaidIt. Check out one of the hottest attack ads above.
4.7
Score
Popularity
Activity
Freshness
Access Advisory Services