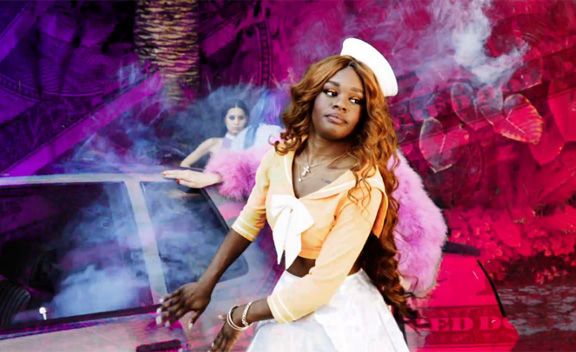 Laura McQuarrie — October 22, 2013 — Pop Culture
References: style.mtv
Share on Facebook Share on Twitter Share on LinkedIn Share on Pinterest
Azealia Banks' new album, 'Broke With Expensive Taste' is not set to come out until January 2014, but her video for 'ATM Jam' has just been released, which should be just enough to tide you over for a few more months. This is a song that was released last summer and produced by Pharrell but nonetheless, Azealia fans will adore seeing even more of her outrageous style.

The video shows digitally-altered clothing, which changes colors when being worn. Azealia herself makes several clothing changes throughout the video, appearing in an iridescent silver skirt and a yellow-colored sailor crop top an white hat. The backgrounds of each scene are vividly colored, turning ordinary plants into psychedelic ones with purples and reds.