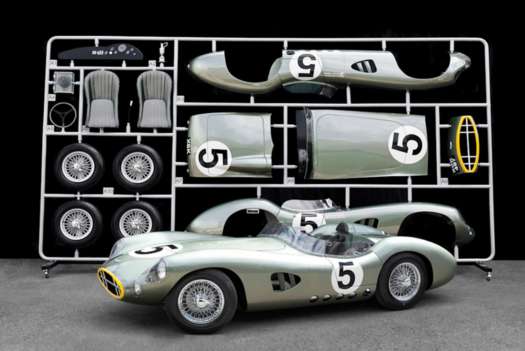 Katherine Vong — August 10, 2012 — Autos
References: evanta & psfk
Share on Facebook Share on Twitter Share on LinkedIn Share on Pinterest
Only five of the legendary Aston Martin DBR1 model was ever built, meaning that to get your hands on this rare race car you'd have to have several million dollars available to fork over. However, the Evanta Motor Company in the UK has created a more affordable version of the rare auto. Its 1:1 version of the Aston Martin DBR1 will be available for less than $50,000.

Evanta Motor Company created the model as a tribute to the drivers who won the 1959 Le Mans race, Carroll Shelby and Roy Salvadori, as well as the main designer of the Aston Martin DBR1, Ted Cutting. The model itself actually contains a real DBR1 body shell that's in the same hue -- Californian Sage Green -- as the original auto. Other details include a 15-inch 'Moto Lita' steering wheel rimmed in wood, Dunlop racing tires with 16-inch Aston Martin wire wheels, as well as Aston Martin-style race seats outfitted in real leather. The model will be auctioned off at the Goodwood Revival event in mid-September by Bonhams.
6.5
Score
Popularity
Activity
Freshness
Attend Future Festival