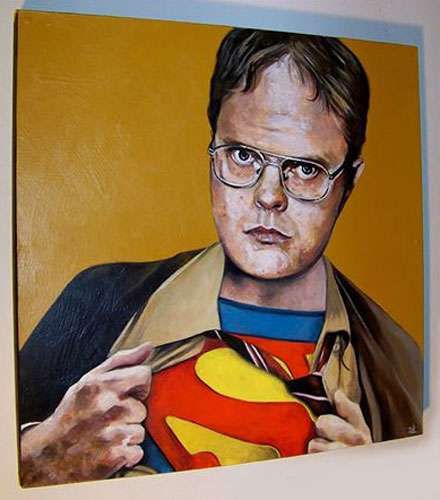 Jordan Sowunmi — August 10, 2011 — Pop Culture
References: jameshance & lifelounge.au
Share on Facebook Share on Twitter Share on LinkedIn Share on Pinterest
Artist James Hance is an illustrator with a penchant for the unusual, and often incongruous blending of different, iconic pop culture brands. His work is almost always comedic, eye-catching, and memorable. All of those traits are on full display in his selected portfolio.

As an artist, James Hance's biggest skill is his ability to connect divergent brands. Many of his illustrations feature Star Wars characters or references, but some of my favorites from his portfolio requires neither. His image of the Office's Dwight Schrute ripping through his generic office wear to become Superman is not only hilarious, but true to the character played by Rainn WIlson.

As an artist, James Hance is in high demand. In addition to a busy exhibit schedule that takes him across the country, he sells prints, t-shirts, and books of his work on his website. Just like his artwork touches so many different realms, James Hance the person does the same.

Implications - A company seeking to engender goodwill from its fanbase would be wise to feature advertising that directly mocks or mimics a popular cultural trope. By connecting their brand name to something so instantly identifiable and current, the company shows that it has its finger on the forefront of contemporary pop culture, attracting hip consumers and culture enthusiasts alike.
4.5
Score
Popularity
Activity
Freshness
View Innovation Webinars