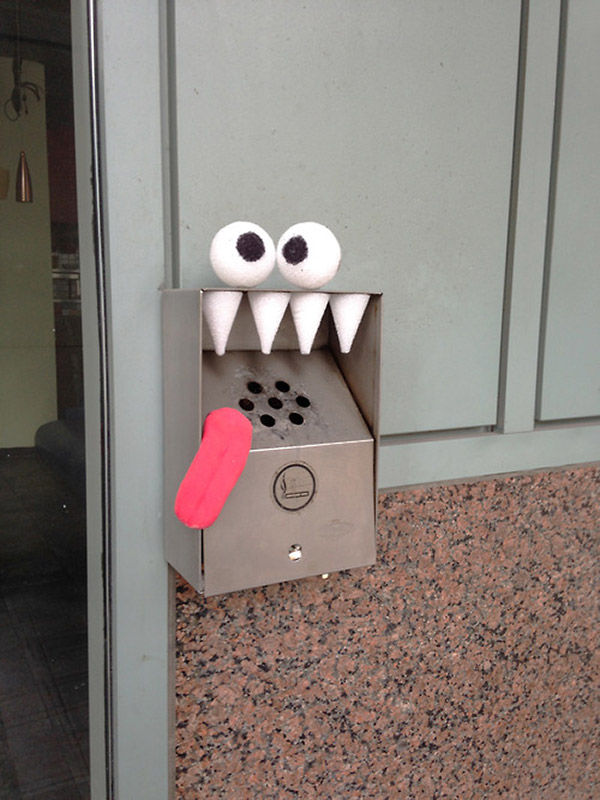 Akihiko Tse — September 21, 2013 — World
References: pizzaandpixels.tumblr & likecool
Share on Facebook Share on Twitter Share on LinkedIn Share on Pinterest
Toronto-based street artist Aiden Glynn gives the streets some teeth, literally. In a series of art pieces constructed by simply adding a couple of eyes and some teeth, a tongue or a mustache, Glynn adds some life to everyday street fixtures. In photos posted to his Tumblr page, titled Pizza and Pixels, the animator, street artist and character developer adds an animated touch to everyday objects that we would ordinarily overlook.

Among Glynn’s artwork, he turns a trash can into a waggish monster with his tongue reeling off the corners of the trash opening, while a cigarette disposal is made into a wacky looking character with jagged teeth, almost begging to bed cigarette butts. “Its so funny to see that by adding eyes and teeth to an object it instantly gives them so much character. I honestly had the best time making these,” writes Glynn on his Tumblr page. Glynn has also featured artwork involving video game characters like Super Mario and Pacman.