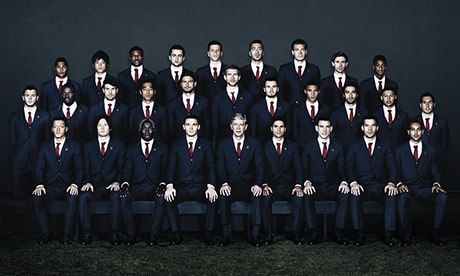 The football club recently announced Lanvin as its official tailor and the Parisian fashion house will outfit team members in Lanvin Homme suits between games during official appearances. The guys clean up quite well and they are clearly loving their dapper new suits. Players like Olivier Giroud and Jack Wilshere have already been snapping selfies of themselves in the new suits.

It's an interesting mix, since the Lanvin Homme suits come from one of Paris' oldest fashion houses. Despite this, the suits manage to bring a fresh sort of modernity and a coolness to both Lanvin and the Arsenal football team.

Label-Laden Jackets
These Designer Jackets from Wil Fry Let You Wear All Your Favorite Brands.