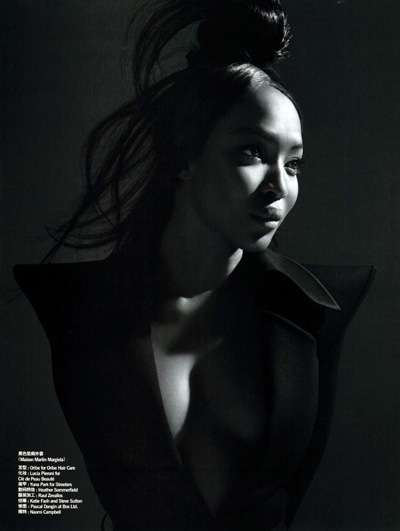 lourdes sanchez bayas — December 15, 2008 — Fashion
References: designscene.net
Share on Facebook Share on Twitter Share on LinkedIn Share on Pinterest
British uber model Naomi Campbell has been featured on back-to-back covers of Vogue Magazine. The temperamental, but absolutely gorgeous, muse graced the December 2008 issue of Vogue Russia. Currently, the sizzling supermodel has center stage on the cover and editorial of the January 2009 issue of Vogue China.

While the black and white Vogue Russia spread played off the current fascination with superheroes by having Naomi pose in a stylish and sexy Catwoman costume, Vogue China cast the model in a very dark set with an obscured background. The blackened set was punctuated by a faded but soft spot light that focused exclusively on Naomi’s shadowed features and strangely armless torso.

The shot was photographed by Mario Sorrenti.