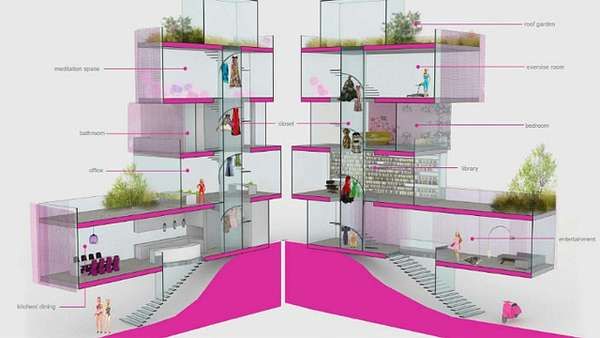 The Architect Barbie Dreamhouse is a Career Woman's Haven

Corinne Guirgis — August 6, 2011 — Life-Stages
References: gizmodo & buzzfeed
Share on Facebook Share on Twitter Share on LinkedIn Share on Pinterest
Barbie's got a new career, and like every powerful, 21st century career woman, her home is getting pimped out; the Architect Barbie Dreamhouse is a high-class, luxury modern design concept that blows many of today's modern architectural wonders out of the water. With a predictably pink exterior, the home is a multilayered, geometric mansion with floor-to-ceiling glass windows defining its layout. Barbie has held over 120 careers since her inception in 1959, and with the doll making the move to architecture this coming fall, she'll need this eco-friendly, four-story abode to come home to after her long day of work.

The home -- which, according to Gizmodo, was designed to balance on a steep incline like the Hollywood Hills -- will be manufactured by Mattel to coincide with the release of Architect Barbie. Designed by Ting Li and Maja Parklar for a competition to crowdsource the perfect design, the dreamhome is a plastic embodiment of good architecture, going so far as to include a meditating space, a green roof, solar panels and bamboo floors.

Implications - Since its inception in the 50s, Barbie has seen a great deal of controversy concerning the values she represents to young girls. As a result, her growth has followed the timeline of emerging feminism, and career-themed dolls are among the most popular. Of course, the brand's empire expands far beyond the dolls, and accessories from dream homes to convertibles account for a large portion of Mattel's profit.
4.4
Score
Popularity
Activity
Freshness
Attend Future Festival