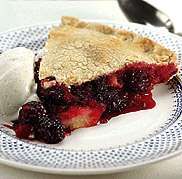 Greg Ponesse — June 5, 2006 — Business
References: news
Share on Facebook Share on Twitter Share on LinkedIn Share on Pinterest
Rumor: RIM and Apple cultivating the AppleBerry?
June 5, 2006 1:39 PM PDT
It seems like something that would be next to the Count Chocula breakfast cereal at your local supermarket. But the "AppleBerry" would actually be the fruit of a partnership between Research in Motion and Apple Computer to develop an Apple-style version of the BlackBerry, according to an analyst report.

Peter Misek of Canaccord Capital issued a research note on Friday musing that Apple and RIM might be working on a product together based on the advice of their common partner, Intel. Apple's got the design expertise that has made the iPod a hit, but it doesn't have the relationships with carriers and handset makers that RIM does, he wrote in his report.

For some time, Apple has been rumored to be working on an iPhone, and a deal with RIM would allow it to build such a device that could also take advantage of the BlackBerry wireless e-mail software, Misek wrote. Misek envisioned three scenarios: the iTunes software on a BlackBerry device (in the same way that iTunes is now available on Motorola's Rokr and Slvr phones); an iPhone using the same Intel Hermon chip used to build the BlackBerry 8700, or a completely new device.
4.7
Score
Popularity
Activity
Freshness
View Innovation Webinars