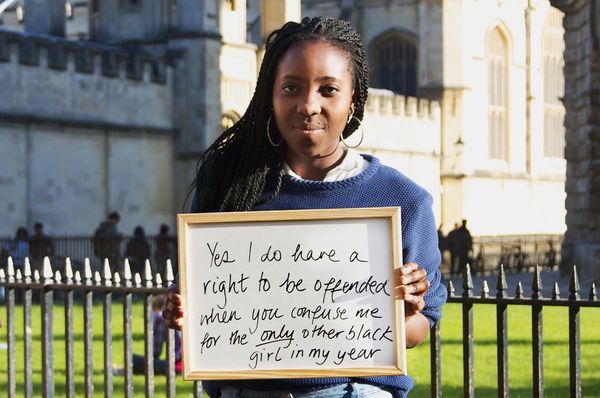 The Anti-Racism Campaign ‘I, Too, Am Oxford’ is Powerful and Direct

Farida Helmy — March 26, 2014 — Social Good
References: itooamoxford.tumblr & theguardian
Share on Facebook Share on Twitter Share on LinkedIn Share on Pinterest
Inspired by the recent viral ‘I, Too, Am Harvard’ initiative by students who felt they were looked at and treated differently because of the color of their skin, the new ‘I, Too, Am Oxford’ anti-racism campaign helps get the message across one more time.

Both anti-racism campaigns were inspired by the line “I, too, am America” from a 1926 civil liberties poem, and hopefully the initiative will make a difference.

“Students in their daily encounters at Oxford are made to feel different and ‘Othered’ from the Oxford community. Hopefully this project will demonstrate that despite there being a greater number of students of color studying at Oxford now than there has ever been before, there are still issues that need to be discussed,” says the team behind the ‘I, Too, Am Oxford’ student initiative.

With 70 students of color posing with the sort of degrading comments they have been dealing with, these students are taking a stance and demanding that a discussion on race be taken seriously.
5.3
Score
Popularity
Activity
Freshness
View Innovation Webinars