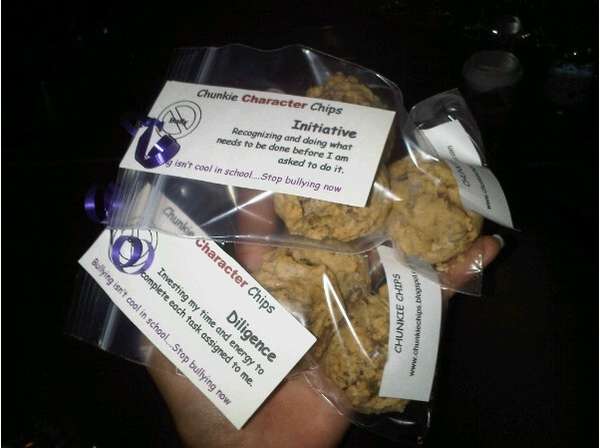 Jaylan Williams not only saw other children being bullied but was also the victim of bullying himself, and decided to be proactive in his school. Williams, along with some fellow classmates and teachers, began a no-bullying campaign. Fortunately, Williams was able to use his baking skills to ensure the message reached even the bullies -- how’s that for turning the other cheek?

The slogan, “Bullying isn’t cool in school… Stop bullying now,” appears on every bag of Chunkie Character Chip Cookies, as does an anti-bully logo. Additionally, each bag of cookies carries a different message about various character traits; for example, “Initiative -- Recognizing and doing what needs to be done before I am asked to do it” and “Diligence -- Investing my time and energy to complete each task assigned to me.

Williams’ anti-bullying dessert campaign is currently local, but he'll unveil the Chunkie Character Chip Cookies to a wider audience on March 26 at the 2011 Kids' Business Expo in Atlanta, Georgia. When I confirmed the venture with his mother, author LaVender Williams, she replied, "We've decided this will set his cookie business apart from others... Chunkie Chips is now the cookie with a cause!"
4.4
Score
Popularity
Activity
Freshness
Attend Future Festival