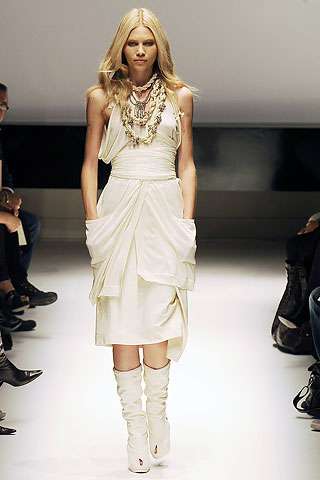 Bianca — January 10, 2009 — Fashion
References: style
Share on Facebook Share on Twitter Share on LinkedIn Share on Pinterest
Anne Hathaway and Kate Hudson's new flick is only adding to the wedding obsession in tinsel town, a phenomenon leaving women desperate to have their own day in white. We’re constantly reading about celebs getting engaged, eloped and married, so it’s no wonder so many women have weddings on the brain...and the way they make it look in Hollywood is oh so wallet-breaking when you try to recreate in real life. Not to mention the huge challenge it is to find Mr. Right.

If you’re not ready to get hitched but still want to enjoy the elegant feeling that comes with wearing a white dress, you’re in luck, because for spring 2009, designers have produced a huge variety of pretty pale frocks.

If you’re yearning to dawn a white frock, get dolled up in something less formal and let Anne Hathaway and Kate Hudson say their I Dos in the their new flick, ‘Bridal Wars.’
4.4
Score
Popularity
Activity
Freshness
Jeremy Gutsche Keynote Speaker