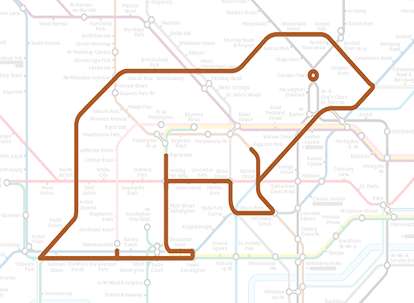 Animals On The Underground

Cowbag — May 23, 2008 — World
References: animalsontheunderground
Share on Facebook Share on Twitter Share on LinkedIn Share on Pinterest
Tube travel in London can be really boring, but it was actually what inspired the concept of a new game, Animals on the Underground. I say new because it has just recently made it online in the form of a web game, but Paul Middlewick first identified animal shapes using the London Underground in 1988 on a journey home (I guess he was bored on his commute too.)

Paul's original animal was an elephant which has now been joined by many others including bats and bottlenose whales, but there are new animals being discovered all the time. The spoil sports on London Undergound don't allow you to do this on their real life maps, but is it still a lot of fun.

After all, what else is there to do now Bo Jo has banned drinking on the tube?

34 Hidden Finds
From Hidden Humidors to Subversive Messages in Coffee