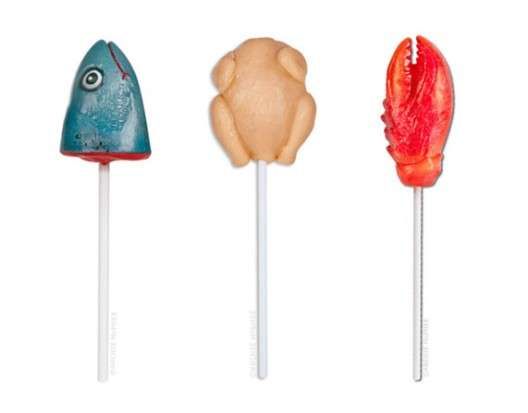 Meghan Young — February 10, 2012 — Lifestyle
References: mcphee & thetrendygirl.net
Share on Facebook Share on Twitter Share on LinkedIn Share on Pinterest
As savory as the Animal Head Suckers may appear, they are still sweet to the tongue. Despite how unique this collection of lollipops is, the flavors are very much traditional. For instance, the Fish Head sucker tastes like sour lemon while the Lobster Claw Lollipop has a classic strawberry flavor.

Available online at the American joke shop known as Archie McPhee, the Animal Head Suckers may not look appetizing, but instead of making people feel queasy, they will make people laugh. In addition to the fish and lobster versions, the Animal Head Suckers include a plucked chicken with an orange flavor, a coiled snake with a cinnamon flavor and, finally, a slug that tastes like banana. They may look realistic, but the Animal Head Suckers are completely edible.
4.9
Score
Popularity
Activity
Freshness
Attend Future Festival