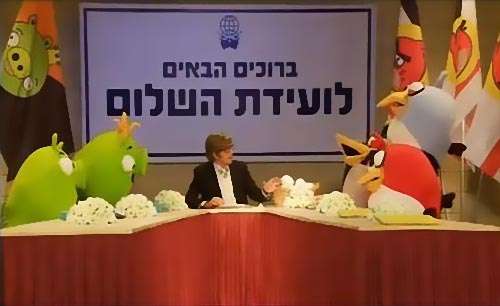 Matt Ho — November 23, 2010 — Pop Culture
References: rovio & gadgetsin
In the hilarious Angry Birds Peace Treaty video, the Angry Birds and the pigs are brought together by a third party who wants them to sign a peace treaty to end their war. After the red bird’s hot temper and foul language nearly ruins any hope of reconciliation, a song brings the two enemies together. But alas, a surprising visitor ends the brief moment of peace which results in chaos in the room.

With Angry Birds’ rise in popularity and a sequel in the works, how much longer will the Angry Birds stay, well, angry? According to the Angry Birds Peace Treaty video, it looks like they might keep their hostility towards pigs forever.
3.6
Score
Popularity
Activity
Freshness

19 Plush Toys for Boys
From Tenticled Superheroes to Bacterial Toys