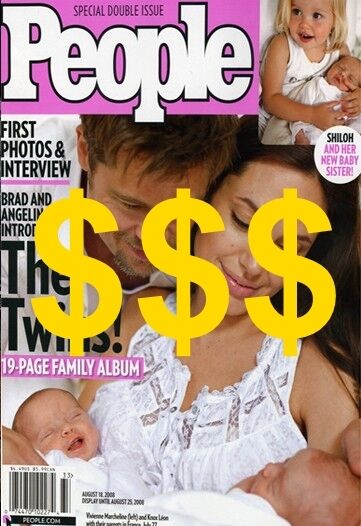 Ayman — August 30, 2008 — Celebs
References: wwd
The numbers are in, and it looks like People magazine's considerable investment in the baby pictures of Angelina Jolie and Brad Pitt twins has paid off. Jennifer Aniston probably accounts for a considerable portion of the copies sold...

With 2.6 million sold copies, the issue with the Jolie-Pitt twins pictures is the magazine's best seller in over 7 years. The number is a considerable increase over the 2.2 million copies sold of the June 19, 2006 issue featuring pictures of Angelina Jolie and Brad Pitt's first biological daughter, Shiloh.

Not only that, it is also the fourth highest newsstand seller in the 35-year history of the magazine. The only three issues that have sold more copies are: the September 11 issue (4.1 million), the Princess Diana’s death issue (3 million), and the John F. Kennedy Jr. death issue (2.8 million).

People jointly scooped up the exclusive pictures rights with UK tabloid Hello! magazine for $14 million. People magazine held the rights to publish the photos in North America, while Hello! had the publishing rights in Europe.
4.1
Score
Popularity
Activity
Freshness