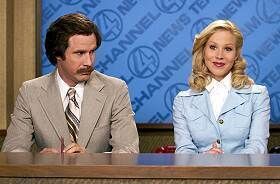 Bianca — August 4, 2008 — Pop Culture
References: hollywoodinsider.ew
Share on Facebook Share on Twitter Share on LinkedIn Share on Pinterest
Anchorman: the Legend of Ron Burgundy, the hit Will Ferrell comedy, is getting a sequel! Sadly, Christina Applegate, who played Veronica Corningstone, Ron Burgundy's rival reporter, has been diagnosed with breast cancer, but hopefully she'll be reprising her role on the San Diego news team. Ferrell, Steve Carell and Adam McKay have already said they'd be on board.

"We had so much fun making that movie, and it was hard to get made," Ferrell said of the original. "But what's been great is it's kind of taken on such a life of its own."

In the sequel, Ferrell will play cheesy Anchorman Ron Burgundy once again, but this time, he'll be a little bit older as the movie will be set in the 1980s instead of the 70s.

Picture it: Ron will be doing his curls for the girls wearing a neon spandex aerobics suit... with a mullet!

"The audience will now allow us to do even crazier stuff and that's really all we're looking for in our careers," said director Adam McKay, the genius behind Saturday Night Live, Talladega Nights, Step Brothers and the original Anchorman.

Those who haven't seen Anchorman (for shame, rent it ASAP!) may remember Christina Applegate from her days on Married with Children where she played Al Bundy's ditsy daughter.

Above is a clip from the original Anchorman film to remind you. Below is a sequence of bloopers from a real 1980s anchorman.