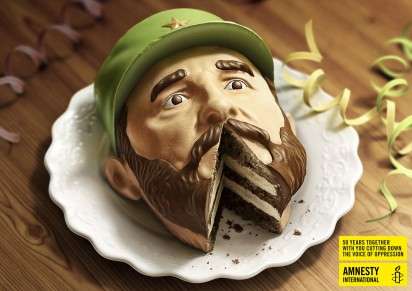 The Amnesty International Campaign Cuts Away at Oppression

Meghan Young — March 6, 2012 — Marketing
References: eurorscg & ibelieveinadv
The Amnesty International campaign illustrates its achievement in a celebratory way. Instead of depicting their worldly accomplishments through a simple infographic, this ad campaign centers around a cake decorated as the heads of two dictators: Alexander Lukashenko and Fidel Castro. Paired with the phrase "50 years together with you cutting down the voice of oppression," the posters congratulates everyone with a toast and some delicious cake while also showing how much they have 'cut down' this oppression.

Conceived and executed by Prague-based ad agency Euro RSCG, the Amnesty International campaign is clever and creative. Despite the worried and defiant expressions on Castro and Lukashenko's faces, there is nothing they can do to stop this progression.