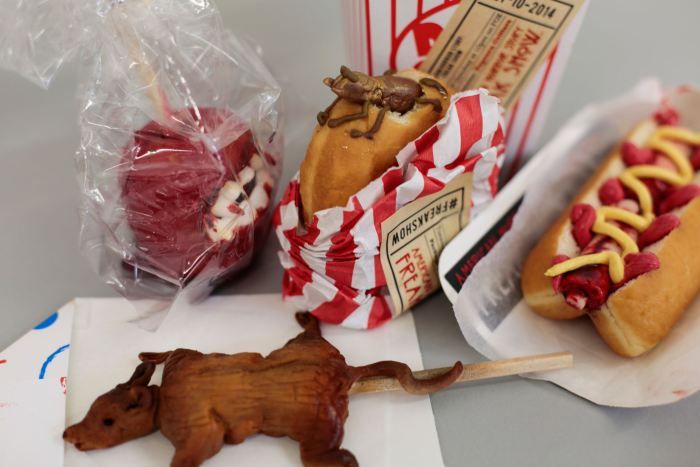 Meghan Young — October 22, 2014 — Lifestyle
References: misscakehead.wordpress & neatorama
Share on Facebook Share on Twitter Share on LinkedIn Share on Pinterest
Miss Cakehead is known for her disturbing desserts, so it is only natural that she would have been inspired by the hit FX television series, 'American Horror Story: Freak Show,' when it came to her next round of delectable recipes. Giving entertainment snacks a frightening twist, she envisions hot dogs made with severed fingers, popcorn topped with insects and an apple with teeth.

Commissioned by FOX International Channels to celebrate the UK premier of 'American Horror Story,' Miss Cakehead collaborated with food artist Jacqui Kelly to create the "freaky fairground treats," as she puts it. The morsels might be macabre, but they are all very edible and tasty. The hot dog is made out of marzipan and donuts, for instance, while the fried rat is stuffed with sweet marshmallow innards.
2.6
Score
Popularity
Activity
Freshness
Attend Future Festival