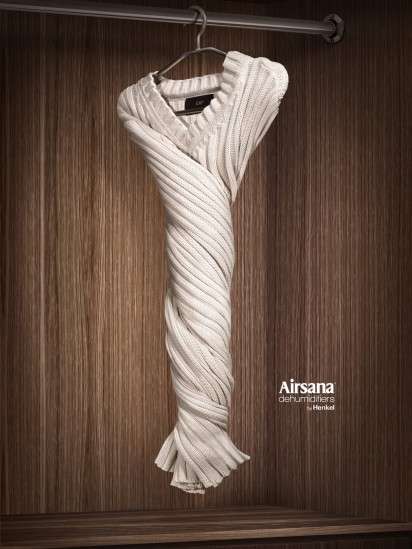 The Airsana Dehumidifiers by Henkel Campaign Squeezes Out Moisture

Meghan Young — June 6, 2012 — Marketing
References: arsddb & ibelieveinadv
Share on Facebook Share on Twitter Share on LinkedIn Share on Pinterest
The longevity of clothes depends on a number of factors, not just the obvious wear and tear ones; the Airsana Dehumidifiers by Henkel ad campaign hones in on a particular factor that many people don't often consider. The moisture in closets and rooms can significantly change the quality of clothing, with this dehumidifier, people can ward off the inevitable for a while longer.

The Airsana Dehumidifiers by Henkel ad campaign was conceived and executed by ARS DDB, an ad agency based in Caracas, Venezuela. Shot by photographer Pedro Primavera, it depicts three different shirts being wrung out, as though some invisible man has decided to release all the moisture residing in the fabric. This 'invisible man,' of course, is the Airsana dehumidifier. Simple and direct, the campaign gets the message across succinctly.
3.7
Score
Popularity
Activity
Freshness
Get Trend Hunter Dashboard