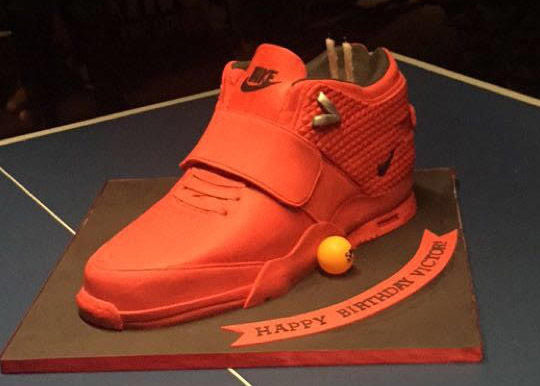 Charlotte Joyce Kidd — November 11, 2015 — Lifestyle
References: keremocakes & caplex
Share on Facebook Share on Twitter Share on LinkedIn Share on Pinterest
On New York Giants wide receiver Victor Cruz' birthday, he took the opportunity to mark another special occasion: the release of the Nike 'Air Trainer Cruz.' The Air Trainer Cruz is set to be released in late November, just over a week after the NFL star's 29th birthday on November 11th. Its distinguishing features include a diamond-textured leather rear and a wide strap across the upper laces.

The Air Trainer Cruz cake was designed and created by Keremo Cakes, an upscale bakery located just north of New York City that specializes in sculptural custom cakes. It depicts an all-red version of the upcoming Nike sneaker, complete with every detail, from the black swoosh on the shoe's side to the metallic hardware around its collar.

Although this may simply have been an ego-stroking move on the NFL player's part, it's creating some social media buzz, acting as effective promotion for the upcoming release of the Nike Air Trainer Cruz model.
1.9
Score
Popularity
Activity
Freshness
Get Trend Hunter Dashboard