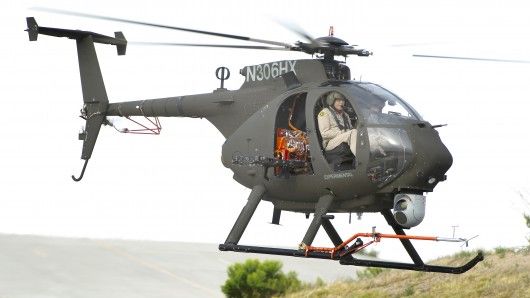 The Boeing AH-6i is Designed for High-Stakes Military Missions

Rahul Kalvapalle — May 7, 2014 — Autos
References: boeing.mediaroom & gizmag
Boeing is preparing to launch the AH-6i helicopter, its latest lightweight attack and reconnaissance helicopter. Boeing recently put the AH-6i through a series of flight tests, bringing it closer to full production.

The AH-6i is designed to provide air support for land-based military forces. It is capable of launching attacks on land-based threats such as tanks and other armored vehicles. The helicopter is a more advanced and sophisticated version of the AH-6M helicopter presently used by the US Army Special Operations Forces.

The AH-6i features an advanced fuel system that gives it an extended range. It is equipped with special sensors that make it effective for both daytime and night-time operations, providing increased flexibility and versatility.

"This first AH-6 flight in the production configuration takes us closer to delivering an advanced light attack and reconnaissance helicopter that meets the needs of defense forces around the world," says Scott Rudy, program director of the Boeing AH-6 line.