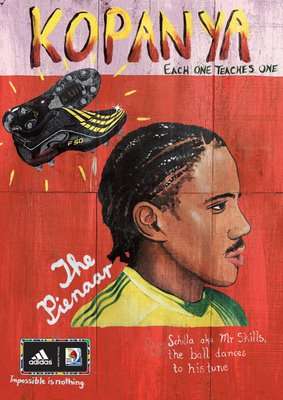 Christina Butty — May 24, 2009 — Marketing
References: adidas & &imgrefurl=http
Adidas has commissioned these awesome ads that recall a key aspect of Africa's popular culture to celebrate the fact that the Confederation Cup is being played on African soil.

These new Adidas ads pay tribute to players Steven Gerrard, Lionel Messi, Kaka and Steven Pienaar. Each ad features a different hairstyle that is customized to the player's particular skill, whether it's dribbling or kicking. What a great way to get some excitement surrounding The Confederation Cup!

Implications - The fact that this soccer player haircut is named after an epic barbershop sign makes it seem even cooler in my mind. With the streets being packed with Obama, Oprah and Denzel Washington supporters, you can bet the Adidas' Africanized Confederation Cup Campaign is making a big splash.
3.4
Score
Popularity
Activity
Freshness