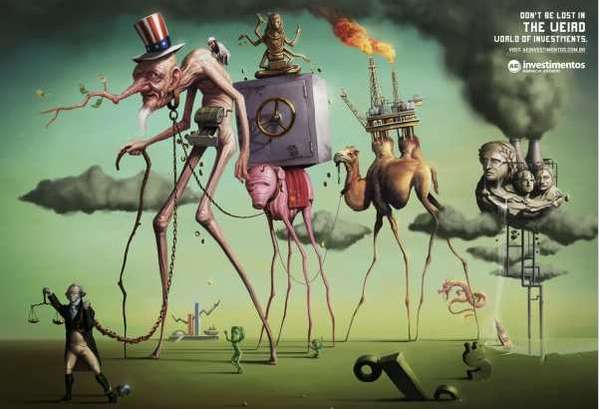 Sandra Winn — January 4, 2009 — Marketing
References: adamhershposters & coloribus
Share on Facebook Share on Twitter Share on LinkedIn Share on Pinterest
Will the real Salvador Dali please stand up? Photos one and four were made for AE Investimentos. The first is called ‘AE Investimentos: Strange’ and the second, 'AE Investimentos: Lion.' Both ads are beautiful yet creepy surreal works of art for the investment world.

The advertising agency Leo Burnett of São Paulo, Brazil created these clearly Dali-inspired investment ads. However, it looks to me as if the agency was more than inspired. Aside from changing the animals around and adding a few more objects in the 'AE Investimentos: Strange' ad, the legs look exactly like those from animals in Dali’s ‘Temptation’ and ‘Bee Flight’ paintings. And the clouds are exact replicas of those in Dali’s ‘Temptation’ painting.

Creative director Ruy Linberg, art director Breno Balbino, copywriter Fábio Nagano, and illustrator Tiago Hoisel did a fantastic job for AE Investimentos. Their use of surreal humans and animals, the background and everything else is captivating--I just think they copied Dali a bit too much.
4.2
Score
Popularity
Activity
Freshness
Get Trend Hunter Dashboard