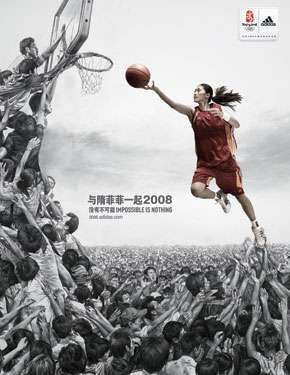 This Adidas ad features famed female Chinese basketball player, Sui Feifei soaring high above a crowd of black and white people. She, of course, is in full colour as she hurtles the ball toward the basket, her physique in perfect position as the fans below her cheer her on.

"Impossible is nothing," the ad reads. Adidas is the official sponsor of the games, and they've made themselves quite prominent through superb international marketing.

The spectators in the print ad are so involved with the game, showing China's dedication to their athletes; some are clamored up the net pole, while others appear to be supporting the star's foot. This is very reflective of the Chinese culture; they believe in connections and supporting each other, in networking, building relationships and sticking together. This ad reflects that very well.

"As the countdown continues for the Olympics, now only eight months away, activewear brands around the globe are already warming up for what observers say will be the biggest marketing platform to dateâ€”not to mention the most profitable in the event's history," Women's Wear Daily points out.