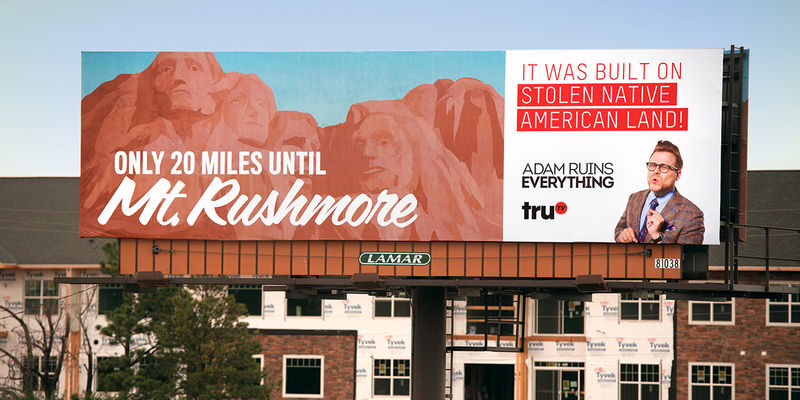 Joey Haar — August 25, 2017 — Marketing
References: adweek
Share on Facebook Share on Twitter Share on LinkedIn Share on Pinterest
It's clear from the name that 'Adam Ruins Everything' is an irreverent and contrarian show, and so it makes sense that the truTV series' latest ad campaign should follow suit. In line with the show's principles, the out-of-home campaign's billboards pose as typical tourism ads, but sidebars highlight bits of information that take some wind out of the locations' sails.

Among the many destinations targeted, the Adam Ruins Everything billboards are prominent around Mount Rushmore. Tourists headed for the historic landmark will read facts like "It was built on stolen Native American land!", "It's actually unfinished, but who cares!", or "It's only about one-tenth the size of the Washington Monument!"

Other travel destinations that have received the Adam Ruins Everything treatment include Napa Valley and Hawaii.
3.3
Score
Popularity
Activity
Freshness
Get Trend Hunter Dashboard