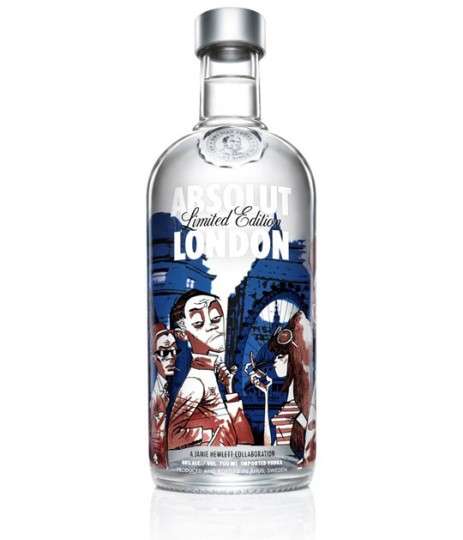 Taylor Keefe — February 8, 2012 — Marketing
References: absolut & highsnobiety
Share on Facebook Share on Twitter Share on LinkedIn Share on Pinterest
For its recent limited edition bottle, Absolut has retained the services of award-winning artist Jamie Hewlett (of the Gorillaz) to design the boldly branded Absolut London bottle. With a long-standing tradition of limited-edition releases, Absolut has another winner on its hand with the metropolitan-infused creation.

The Absolut London bottle may not appear dazzling at first, but on second glance, one can really grasp the intricate details and homage paid to pioneers in London's storied fashion history. The seven influential characters that grace the bottle include the 18th century and Dickensian Dandy, the punks, the 60s chick, the ska rockers, 80s casual and the Pinstripe gent.

A rich heritage spanning over 200 years is adequately represented in the Absolut London design, and will definitely be a collector's item in years to come.
2.8
Score
Popularity
Activity
Freshness
Access Advisory Services