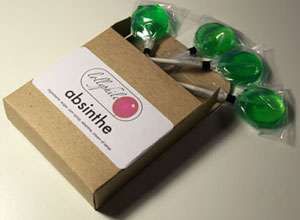 Lollyphile Puts the Green Fairy on a Stick

The San Francisco company has been overwhelmed at the popularity of these anise flavored little suckers. Their mildly taboo nature makes them all the more intriguing.

"They are made with real (and completely legal!) absinthe, with no artificial colors or flavors at all," the company explains.

The spirit absinthe not only has an alcohol content of 45%-75% ABV, but the herbal drink also has thujone, the chemical that was, for many years, attributed with addictive, psychoactive properties. The drink, which originated in Switzerland, was banned in the early 1900s in the US and most of Europe. Today, it's been shown that when consumed in moderation, is not harmful at all and is being sold again in many countries.

"After a ridiculously long prohibition, absinthe has officially made a comeback," Lollyphile explains on their site. "The US Government recently approved the sale of absinthe within certain guidelines, namely that there is less than 10ppm of thujone. Our Absinthe Lollipops contain an amount of thujone that is within the legal limits set by the US regulatory authorities and of the European Union."