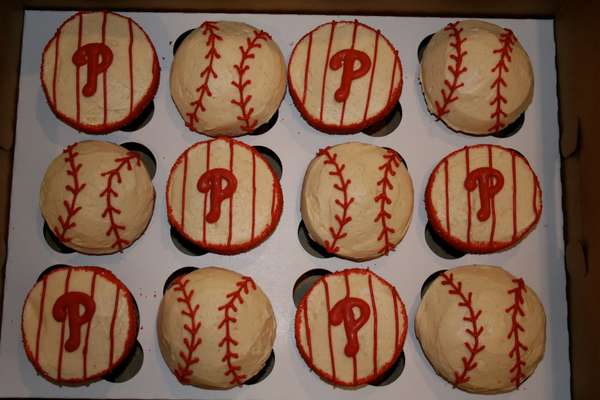 Phillies Cupcakes by A Cupcake Wonderland Are for Diehard Fans

Marissa Brassfield — June 16, 2011 — Lifestyle
References: acupcakewonderland & foodista
These adorable Phillies cupcakes were created by Philadelphia-based bakery A Cupcake Wonderland for a recent birthday party. They're adorned with the Phillies logo "P," baseball gear, and several iconic Philly locations and baseball stadium snacks, from the Liberty Bell and the Phillie Phanatic to cheesesteaks and soft pretzels.

The artisans behind A Cupcake Wonderland are Lily Fischer and Erin Bailey. The team is set to appear on Food Network's "Cupcake Wars" on Tuesday, June 21, when they'll battle it out against three other teams for a sweet $10,000 prize and the opportunity to show off their baked creations at a special event.

If you're based in Philadelphia, A Cupcake Wonderland is hosting a viewing party for the show at the Urban Saloon, at which guests can sample the cupcake flavors Fischer and Bailey created for the competition.
5
Score
Popularity
Activity
Freshness