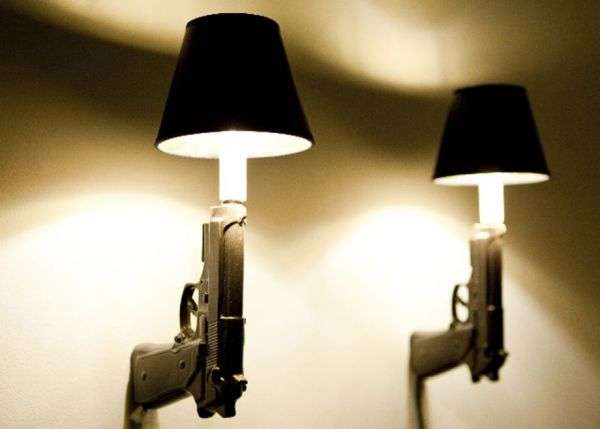 The 9mm Gun Sconce by Ryan Weigner is Dangerously Domestic

Meghan Young — August 21, 2012 — Art & Design
References: etsy & neatorama
Share on Facebook Share on Twitter Share on LinkedIn Share on Pinterest
The 9mm Gun Sconce is a gangster light fixture made for a gangster household. That, or it is made for the super macho man looking to confirm his machoism. Either way, it is a serious creation that will capture people's attention immediately. The sconce has been modeled after two 9mm guns. It is so realistic, it wouldn't be at all surprising if someone mistook it for the real deal. In reality, however, the 9mm Gun Sconce is slip-cast in ceramic through plaster molds.

Conceived and created by Ryan Weigner, a ceramic artist based in Los Angeles, the 9mm Gun Sconce comes with a matte black top hat shade lined with gold to cast a warmer light than would be expected from it. As dangerous as it looks, it is still strangely welcoming.
2.4
Score
Popularity
Activity
Freshness
Get the 2021 Trend Report FREE