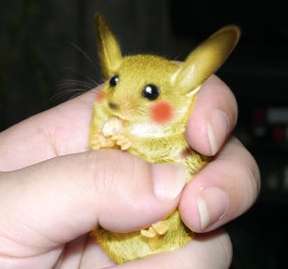 OK, he is not real, but a man claims to have discovered a Pikachu forest (what, inside his photoshop program?) and is offering to catch live Pikachus for $925 million each.

The whole stunt is being done through a Yahoo! Japan Auction, so yet again, my lack of Japanese understanding foils me in being able to tell you the details.

To avoid decimating the population, there is a license to only catch 20 of them. What is more, each comes with three months of Pikachu food and a 60-minute training video to help teach new owners how to properly raise a young Pikachu.

The Pickachu in being held in the hand is the image being used for the auction. The rat in a fancy dress was an image mocked up for someone’s blog and it is pretty cool too.
6.4
Score
Popularity
Activity
Freshness
View Innovation Webinars