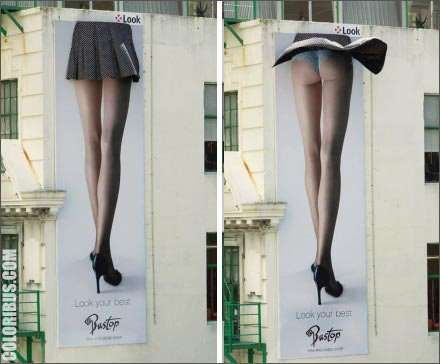 Here we bring you five billboard ads utilizing the ass to sell various products, from jeans and clothes to gym memberships and burgers.

The billboards from top to bottom, left to right are:

1. An interactive billboard for lingerie store Bustop. The skirt lifts up when the wind blows, reminding you to "look your best" in all situations.

2. A billboard for American Apparel in New York, USA that prominently features a female behind.

3. A billboard for Joe's Jeans. Advertising for mens jeans using a naked man with a butt-shot. yeah, I don't get it either.

4. A gym billboard. Say no to crack and go to the gym.

5. My favorite. A McDonald's billboard in Yass (a city in Australia). At least they didn't write MYASS open 24 hours!