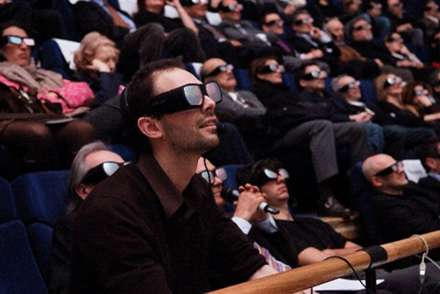 Marissa Brassfield — December 6, 2008 — Lifestyle
References: latimesblogs.latimes & engadget
Share on Facebook Share on Twitter Share on LinkedIn Share on Pinterest
The future of televised sporting events has arrived with the first 3D NFL game between the Oakland Raiders and the San Diego Chargers. While the matchup certainly wasn't anything exciting by professional football standards, it's the technology that dazzled, even in its nascent form.

3ality Digital handled the video production and distribution, and chairman David Modell warned in a pre-game press conference that the broadcast would largely be a training exercise.

Indeed, Los Angeles Times tech writer Jon Healey noted in his write-up, "Some shots were so tightly framed, the action quickly squirted out of the frame. Others were so wide, they were hard to distinguish from 2D images." Healey goes on to admit, "But the field-level and ground-level shots were great."

While 3ality Digital and other 3D video production companies still have quite a bit of fine-tuning to do, it won't be long before our Monday Night Football routine involves dusting off and putting on a pair of 3D goggles.
3.5
Score
Popularity
Activity
Freshness
View Innovation Webinars