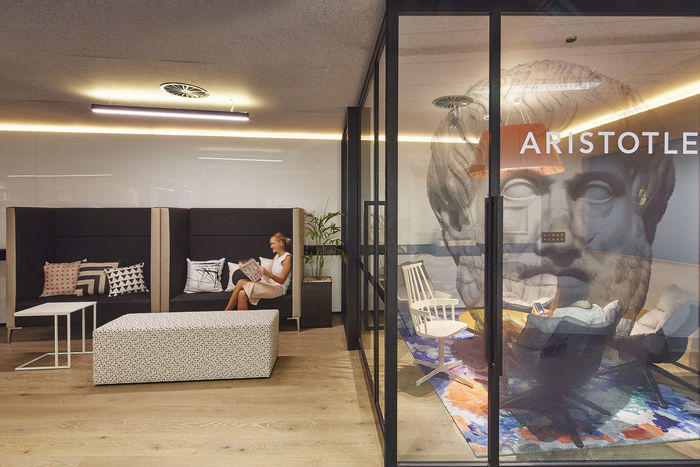 The '2nd Road' Office Was Inspired by Collectivism

Mishal Omar — November 16, 2016 — Art & Design
References: amicusinteriors.au & officesnapshots
2nd Road is a consulting firm based in Sydney, Australia and its office space was designed in a collaboration between 'Amicus Interiors' and 'Mashup.'

The office was inspired by collectivism, which is a moral position or political philosophy that emphasizes the importance of the group and its interests and pursuits – as opposed to the individual's. In most Western cultures individualism is held to a higher regard than collectivism, but Amicus Interiors still decided to incorporate the latter into the design and function of the 2nd Road office. The resulting space features interactive work areas as well as areas in which employees are able to collaborate in a relaxing environment. The philosophical design of the office is both implicit in its ability to emphasize collectivism through function, as well as explicit in its imagery of the famed philosopher Aristotle.

This office space's philosophical and ideological design works to create an environment that works for the better of all 2nd Road employees.
4
Score
Popularity
Activity
Freshness