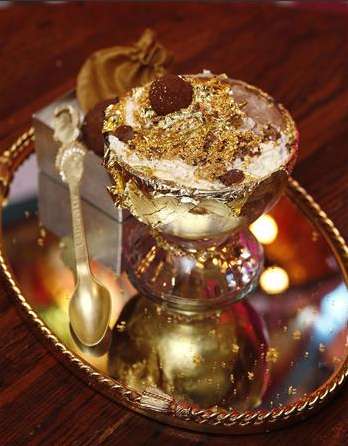 Bianca — November 8, 2007 — Luxury
References: reuters
Share on Facebook Share on Twitter Share on LinkedIn Share on Pinterest
A $25,000 chocolate sundae made the Guinness Book of Records today, officially earning it title for world's most expensive dessert. If you thought the $14,500 Fortress Aquamarine dessert was outrageous, you'll be shocked to discover there's an even pricier calorie bomb on the New York food market.

The "Frrrozen Haute Chocolate" debuted at Serendipity-3 in New York Nov. 7, 2007, a restaurant owned by Stephen Bruce. The frozen hot chocolate was created in partnership with Euphoria New York, the luxury jeweler that supplies the serving goblets lined with edible gold as well as the 0.2 ounces of 23-karat gold sprinkled over each dessert.

The Frrrozen Haute Chocolate itself is a blend of 28 of the world's most expensive and exotic cocoas.

"The sundae is topped with whipped cream covered with more gold and a side of La Madeline au Truffle from Knipschildt Chocolatier, which sells for $2,600 a pound," Reuters explained.

"It is eaten with a gold spoon decorated with white and chocolate-colored diamonds, which can also be taken home."

Though some of our readers might disagree with me, I'd rather buy a new car than slurp down edible gold.

This is the second time pricey New York fare has made headlines this week. Check out the $1,000 bagel!

Check out the previous record holder: