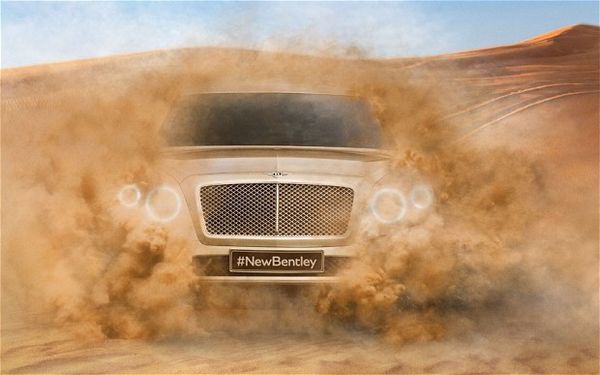 In the teaser picture, most of the vehicle is obscured by billowing dust with the only visible part being the front. What’s clear is that the Bentley’s front will look much like that of the Continental GT.

Bentley first unveiled an SUV concept at the Geneva Auto Show in 2012 but the concept was poorly received, prompting Bentley to make a host of changes. The bulging, over-sized headlights of the 2012 concept have been replaced by more Continental GT-like oval headlights. Based on the front view of the teaser picture, the SUV is set to have a more rounded shape than the stiff, straight-cut concept of 2012.

The 2016 Bentley SUV, it is claimed, will be the world’s first luxury SUV. According to Bentley’s head of sales Kevin Rose, the SUV will “solve the problem for people who’d like to spend more on an SUV.” The SUV is set to cost close to $250,000.
2.1
Score
Popularity
Activity
Freshness
Jeremy Gutsche Keynote Speaker