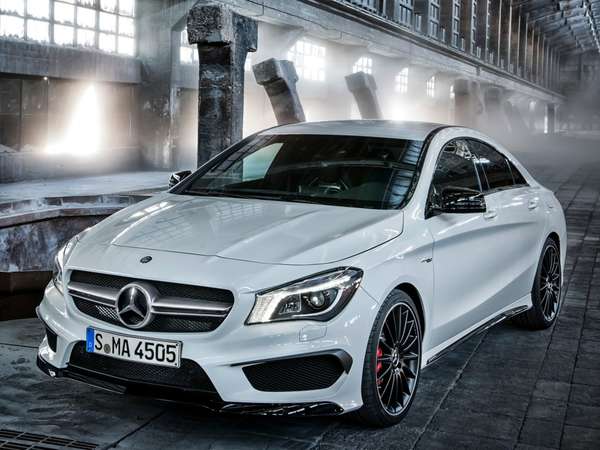 Taylor Keefe — March 21, 2013 — Autos
References: mbusa & motorauthority
Share on Facebook Share on Twitter Share on LinkedIn Share on Pinterest
New York Auto Week is just around the corner, which means the global debut of the 2014 Mercedes-Benz CLA45 AMG is nearing. Well, sort of. Images of the highly touted roadster have hit the web ahead of schedule -- and my oh my, what a stunner.

After its European cousin, the A45 AMG, made headlines earlier this month in Geneva, the CLA45 AMG is gearing up for its world premiere at the New York Auto Show. Except that unveiling hit a speed bump this week when pictures of the new Benz leaked to the web. On first glance, it's hard not to fall in love with this four-door coupe. A fresh exterior and sleek interior, combined with the performance-enhancing features of AMG may well make this Mercedes-Benz's most progressive design yet.

Under the hood, it boasts a 2.0-liter four-cylinder engine capable of pumping out 360 ponies and 332 pounds of torque. That gets you from zero to 60 in 4.6 seconds. However, the most intriguing aspect of the vehicle is price. When it hits the U.S in November, the CLA45 AMG will start at $50,000. This is a steal once you consider all the performance and luxury features.

Due to lack of competitors in its category, the CLA45 AMG will attempt to carve out its share of the market early . Also, look for Mercedes-Benz to have an aggressive marketing campaign aimed at Millenials and young professionals. If anyone is going to make this car a success, it's going to be them.