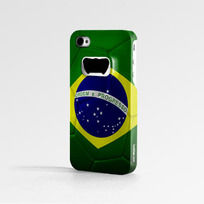 Misel Saban — June 11, 2014 — Lifestyle
References: bottlocase & coolhunting
Share on Facebook Share on Twitter Share on LinkedIn Share on Pinterest
In celebration of the 2014 FIFA World Cup series, Bottlocase released a series of bottle-opening phone cases that are covered in a flag print of different country teams. Now soccer fans can play on their phone, enjoy a beer and watch the game in pleasant harmony.

Each of these Bottlocases comes with a different nation's flag printed along the back portion of the cover. As you enjoy watching the FIFA World Cup series kick off, you can conveniently open your beer bottle using the metallic bottle opener located at the back of the smartphone case. You can choose your Bottlocase depending on which national team you support. Some of the teams featured on these Bottlocases include Spain, Portugal, Mexico, USA, and Holland.