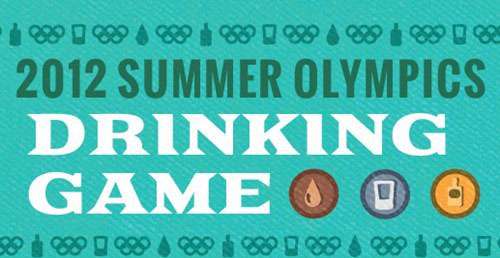 The 2012 Summer Olympics Drinking Game Chart is Tipsy and Fun

Shiori Mine — July 28, 2012 — Pop Culture
References: memebase & survivingcollege
Share on Facebook Share on Twitter Share on LinkedIn Share on Pinterest
Get your popcorn out and your drinks ready cause it's time to get boozy with the hilarious 2012 Summer Olympics Drinking Game chart. As summer games fanatics get glued to their television sets, casual fans can get merry over these meme-curated moments.

Raise your glasses and take a drink anytime you see someone in a hideous national uniform, fail to stick the crucial landing or when the screen flashes to pool monster Michael Phelps. What occasions call for a stiff shot you may ask? A celebratory shooter should be taken when a new world record is set, a high five is left hanging and when you spot a skeptically aged gymnast. Then there are some history-making moments that deserve the elusive chant "Chug, Chug, Chug." If a bare naked spectator runs across the field, get ready because its going to be one messy, boozy night.

The 2012 Summer Olympics Drinking Game chart is a fun and entertaining way to kick off the summer games excitement.
6.1
Score
Popularity
Activity
Freshness
Get the 2021 Trend Report FREE

Number-Based Drinking Games
SudoDRINKu Is a Boozy Twist on Sudoku