Most Powerful & Expensive Vette
Next
Set of
Related
Ideas 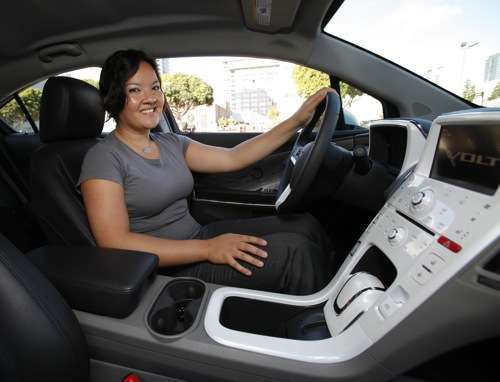 Marissa Brassfield — December 2, 2009 — Autos
References: chevrolet
Share on Facebook Share on Twitter Share on LinkedIn Share on Pinterest
I’ve been living and breathing GM all day long in the lead-up to the LA Auto Show, and this morning I got to take a 2011 Chevrolet Volt—or, should I say, the 2011 Chevy Volt—for a few laps around a test track. It was everything I thought it wouldn’t be. Let me explain.

We’ve done quite a bit of coverage on the 2011 Chevrolet Volt and alternative fuel cars over the past two years; up until now, we’ve been trained to think that affordable electric and plug-in cars are for city slickers who’ll use it to tool around town at 40 mph or less. The 2011 Chevrolet Volt breaks this mold, especially in its one-touch Sport mode, where it’s surprisingly sprightly, responsive and fun to whip around corners.

And the most surprising thing about driving the 2011 Chevrolet Volt and watching others drive it? The car is eerily quiet. You hear a gentle whir as the car accelerates, and a low, satisfying growl as the gas engine kicks on at higher rates of speed—and that’s it, save the crunch of tires on gravel. With its aggressive street presence and responsive handling, the 2011 Chevrolet Volt is clearly no ordinary green car.

In the gallery above, you’ll see my snaps from today’s pressers, including Bob Boniface introducing the media to the nuances of the 2011 Chevrolet Volt, as well as screenshots from the Chevy Volt site.
3.6
Score
Popularity
Activity
Freshness
Attend Future Festival