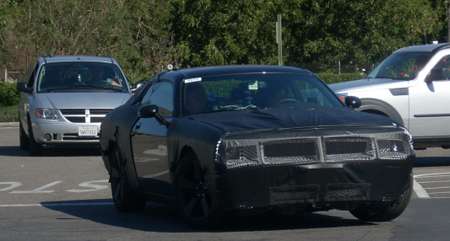 "A two-tone 2009 Dodge Challenger was spotted in Detroit earlier this month, but it was all the way back in August when we brought you shots of this all-black Challenger," Autoblog said. "That car hasn't been spotted cruising around the streets of Detroit in a while, the reason being is that it's no longer in the vicinity of Detroit. Recently the car was spotted far from home at Harrah's Rincon Casino and Resort in Valley Center, located in sunny San Diego, California."

"We can only assume that the folks from Chrysler were flogging the camo-clad Challenger around the mountain road. Testing was certainly in progress during this sighting, as it was closely followed by Dodge chase vehicles complete with roof antennas."

The masked Challenger images are the new photo leaks, while the orange floor models are images from Automobile Magazine.

It might not be very girly of me, but I adore the new Challenger. I've always been intrigued by muscle cars and am looking forward to taking one these beauties for a spin once they hit the market!