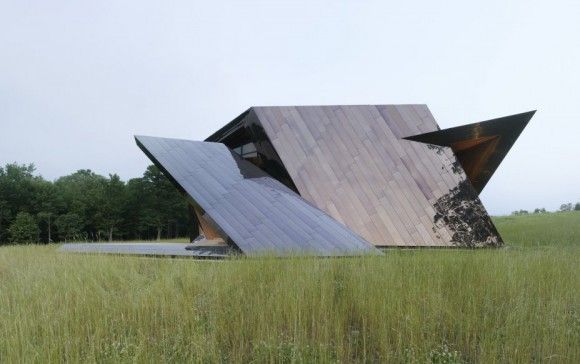 18.36.54 by Daniel Libeskind is Full of Futuristic Sharp Lines

Meghan Young — May 28, 2014 — Art & Design
References: daniel-libeskind & whitezine
Share on Facebook Share on Twitter Share on LinkedIn Share on Pinterest
18.36.54 by Daniel Libeskind, an international architect with studios in New York, Zurich and Milan, is a futuristic residence that boasts a lot of experimental elements. The design looks as though it is made up of sharp shards, giving it an overall surreal appeal. As though modeled after obsidian, the surface is dark and shiny as well.

Located in Connecticut, United States, 18.36.54 by Daniel Libeskind is visually striking. That doesn't end with its exterior. The inside mimics the severe angles of its outer design, but with a warmer undertone since it is covered in dark wood. Funny enough, Whitezine notes that "everything looks like it could collapse at any time." Of course, it is much sturdier than that.
3.8
Score
Popularity
Activity
Freshness
Attend Future Festival