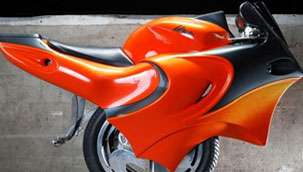 Elsa Blaine — November 17, 2008 — Autos
References: financialpost & cbc
Thanks to the CBC, the Uno motorized vehicle designed by 19 year old Canadian Ben Gulak is about to take the next step. Gulak appeared on the television show ‘Dragon’s Den’ to pitch his product and ask for funding to go forward with it. Gulak started off looking for a 15% cut, he was counter-offered 30%. The final outcome was a $1.25 Million investment and a 20% cut.

Dragon’s Den is a CBC series where entrepreneurs present their concepts to successful business people in the hopes of getting them to invest in their product or service. These potential investors are called Dragons.

In this episode the ‘Dragons’ were so astonished by both the Uno and Gulak’s enthusiastic presentation that group unanimously offered him $1.25 million for a 20% cut of the business.

On a personal note, I had no idea Gulak lives 20 miles away from me, in a town called Milton, Ontario. I wish him all the best.
5.7
Score
Popularity
Activity
Freshness