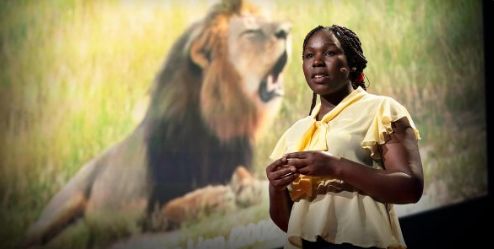 Moreangels Mbizah opens her keynote by sharing her personal reaction to when Cecil the lion was killed by a trophy hunter. Mbizah outlines how she was heartbroken as she had become attached to the lion, however the death of Cecil shed a global spotlight on the importance of conservation.

Moreangels Mbizah continues to state the importance of local communities interacting with wildlife. She states that if local communities are not involved in conservation, then outside intervention will not solve the issue, irrespective of scale or resources.

The Value of Eco-Friendly Burials
In Her Talk on Burial, Caitlin Doughty Discusses Changing Values
play_circle_filled