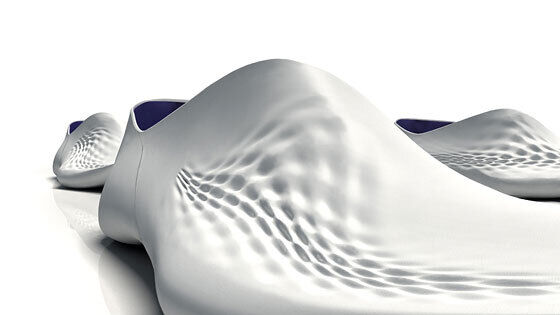 Trend Hunter recently featured a futuristic Lacoste spot celebrating their 75th anniversary that showed what Lacoste gear could look like in the year 2083. And if Lacoste wanted to have a futuristic shoe design right now, there is no one better than Zaha Hadid for the job.

Lacoste previewed the aerodynamic Spring 2009 shoe at the Frieze Art Fair in London, and NY Magazine scored official mockup of the shoes which you can see in the gallery above.

Zaha Hadid explained in a press statement, “The design expression behind the collaboration with Lacoste footwear allows the evolution of dynamic fluid grids. When wrapped around the shape of a foot, these expand and contract to negotiate and adapt to the body ergonomically. In doing so a landscape emerges, undulating and radiating as it merges seamlessly with the body.”