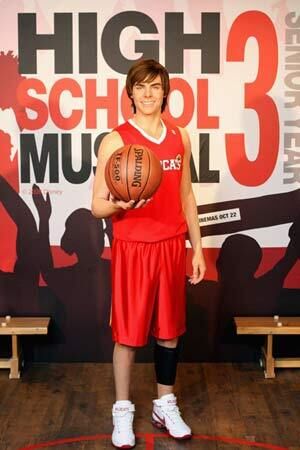 From Zac Efron to the Jonas Brothers

Marissa Brassfield — October 15, 2008 — Pop Culture
References: madametussauds & justjared.buzznet
Share on Facebook Share on Twitter Share on LinkedIn Share on Pinterest
Teen sensations Zac Efron and the Jonas Brothers are two of the ten pop culture icons who have been recently immortalized in wax, and two of the five in this gallery that can’t buy beer or vote. While the Madame Tussauds franchise has always kept its collective finger firmly on the pulse of pop culture’s major players, I can’t help but wonder if some of these figures will remain relevant in generations to come.

I mean, the Jonas Brothers and Zac Efron have each made their mark on America’s teens relatively recently. And Amy Winehouse’s personal troubles have made her a dangerous figure for young children to see; after all, who wants to explain tattoos and track marks to an eight-year-old?

One of the more bizarre wax figures in any Madame Tussauds all over the world has to be Shiloh Jolie-Pitt. As a baby. There are adult actors and musicians who couldn’t get a wax figure if they wanted one, and the first naturally-born daughter of Brangelina gets one as an infant. At least Zac Efron and the Jonas Brothers have done something.

Click through the gallery to see some of the latest pop icons to be immortalized with their own wax figure. From Zac Efron to Justin Timberlake and the Jonas Brothers to Johnny Depp, time will only tell how relevant--or irrelevant--these household names will remain in years to come.
2.7
Score
Popularity
Activity
Freshness
Get Better and Faster